I've recently got my mini-x working in serial with a Garmin 296. I've got it configured where the Garmin 296 is GPS2 and the Mini internal is GPS1.

I flew 5 legs with it yesterday its awesome! Like anything this complicated and capable there are going to be things that users would like to change. Of course you guys will do what you think is best, but hopefully you'll consider the following:

You'll also see that I changed the VSI display to a simple arrow that grows as needed up or down from the aircraft reference altitude line. It doesn't have to be exact since the exact number is shown numerically in a black box that the arrow points towards

When I have the mini using GPS2, the waypoints will sequence off the Garmin 296's flight plan as each one is passed, and the next one will become active just fine. The only problem I've discovered is that on the PFD display the magenta line in the sky is hard to see on the screen. If I am going direct to a fix using the mini's internal GPS1, the available Highway In The Sky (HITS) is far superior, especially when the boxes are white.

The problem right now is that HITS is only available when using the INTERNAL mini flight plan, not the external one off the Garmin. So right now I have to go to the FLIGHT PLAN, copy the external Garmin 296 active waypoint to the mini internal plan, and then go back to the PFD and switch to using GPS1 then the HITS starts working.

Then as my flight progresses, I have to repeat that process for each waypoint leg. I've tried copying the entire multiple leg flight plan from the garmin to the mini, but it only copies the active waypoint from the external gps.

Logic would lead me to hope that if the magenta line can be drawn in the sky from the external flight plan, then maybe the enroute HITS can too?

When using the Mini's own internal GPS flight plan navigation, some sort of main menu single button push to recalculate present position direct to the current active waypoint would be useful for VFR flying. How many times a day do we drift off course to look at something, avoid a cloud or traffic and then wish to proceed direct from there towards destination? Some sort on instant re-direct button would be a great addition. This of course would not apply if navigating off an external GPS source like in #2 above, where the waypoint redirect would be initiated on the external gps unit.

The Synthetic AP approach (SAP) HITS is great for situational awareness. However, the green and red Height Above Touchdown (HAT) numbers are hard to see in the ground clutter, so I suggest putting them in a gray box a with a label.

Another feature I would like to see would be the ability to set a non-standard (steeper) glidepath angle to the runway. I can understand the reluctance to do this for safety purposes, but maybe it could be done with some sort of routine where it defaults to present settings, and has to be changed if desired on a case by case basis. Right now, I'm flying a slow high drag aircraft that on a normal glideslope is absolutely dragging it in at 3 degrees, so I just fly about 1.5 boxes above the boxes to the runway. Being able to chose 4 or 5 degrees would put it right where I operate normally to make the runway in case of engine failure.

Thanks for your consideration, and a great product! 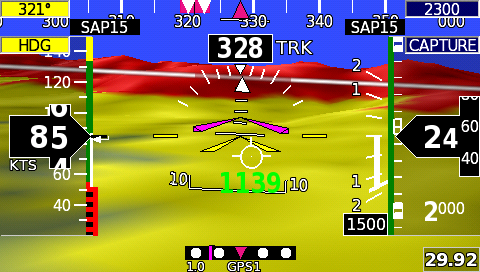 The enroute HITS requires origin coordinates, and they aren't always sent by the GPS. Make sure your GPS is providing all flight plan data. The Garmin 296 and similar units usually have to be set to "Normal" output mode, and sometimes the "RTE" and "WPL" sentences have to be turned on.


Another feature I would like to see would be the ability to set a non-standard (steeper) glidepath angle to the runway.

The Approach Glideslope Angle setting was missing in older Mini software. This was fixed in version 1i, available on our web site. The setting is in SET MENU, Primary Flight Display.
Top

Thanks for the reply, I will try those things you mentioned next time I go out. I'll also take lack of immediate dismissal or negative comment on the other stuff I mentioned as a positive response

I appreciate that you guys are constantly improving the product and issuing updates pretty often, since they are really easy to install on the unit.
Top

1. VSI - needlle
The position of the needle is not allways visible, so the needle is mostly useless. The digital window changes position belonging the direction of that vertical speed.
For a cristal clear and quick scan of the entire screen, analogue visualisation is a bit faster to check then digitalized. So it would be really nice to
make the needle of the VSI plain white with a outline in black


2. Terrain data outside USA
European terrain data seems not to be available at the moment, even if the datas are public for free. The mini neither shows chart details nor terrain shadowing.
Also obstacle data would be a great advantage for that.
The process for initial setup should contain a selection of the world region, where the Mini would be used.
After then a short check of files to upload or inside data (coordinates) could result in a succesful or failed load of terrain /obstacle data.
Actually, the actual software does simply nothing and displays only NAV-Data from the (worldwide) US-file. The checks are all passing with succes despite a black screen and no terrain shadowing.

3. Boot-screen
Your bootscreen with versions and check- results is ok, but I propose you a consistent table in a form like this:

4. Handling of units
One can set either NM with knots and fpm or km with km/h and m/s
(the abreviation kph is wrong, the suppression of the physical entity is not allowed belonging SI / ISO, it should be km/h or kmph)
Obviously, only 3 states from 200 of the whole world have not accepted the metric system: USA, Liberia and Myanmar.
In Aviation there is a long history for the old system*, but usually a mix of units.
I would personally like to see km/h for speed, but feet and fpm for ALT and VSI (becaus of charts and standard climb and descent rates). This is not adjustable today .
So I propose to make a setup position where I can toggle between each physical unit like it is the case for temperature and barometric pressure.
And last but not least: it would be fine to regroup all this setup params under the same screen.

* Glider: worldwide in km/h and m (ALT) m/s (VSI) (except probably USA?) All glider towing machines in Europe and Asia are equipped in conformity)
GA: East of Europe, Russia, China: all in km/h, m , m/s; Central and West of Europe: mixed, mostly kts/feet/fpm never airplanes are double equiped or adjustable (see also Garmin). The oficial data and manual for my airplane is completely in metric convention, therefore I prefere to have speed indications in conformity with manual and legal documents in kilometer per hour. Distances are quite ok in NM, because of tradition and fpm also.
Top

cosy wrote:4. Handling of units
One can set either NM with knots and fpm or km with km/h and m/s
(the abreviation kph is wrong, the suppression of the physical entity is not allowed belonging SI / ISO, it should be km/h or kmph)
...
I would personally like to see km/h for speed, but feet and fpm for ALT and VSI (becaus of charts and standard climb and descent rates). This is not adjustable today .

As far as I can tell, if you want to use the ADS-B functions, you need to connect to an ADS-B in device using either a Serial or USB connection. It would be nice if you could connect to one of the popular "Puck" devices by Dual or Garmin using the Bluetooth connection.
Top

Is there any plan to add IFR/VFR Chart display (eg; Seattle Avionics)?
Top

Is there any chance of including the ability to display co monitor warnings . It is a nice feature that I used on the MGL Xtreem and was useful when the co sensor is remote. I see this is available in other models but not on the Mini.
Also where is the time displayed I have enabled time display but can't find it anywhere.


STEVEC wrote:Is there any chance of including the ability to display co monitor warnings . It is a nice feature that I used on the MGL Xtreem and was useful when the co sensor is remote. I see this is available in other models but not on the Mini.
Also where is the time displayed I have enabled time display but can't find it anywhere.

We are considering adding the CO Guardian functions to the Mini.

The clock time is currently missing from the Mini PFD due to screen space limitations. We are planning to use the lower left corner for data boxes and functions you can change with a button, so the clock may appear there in a future software update. If you have the map option, the clock appears in the upper right corner of the map.
Top
Post Reply
9 posts • Page 1 of 1